THE GUINNESS BOOK OF WORLD RECORDS 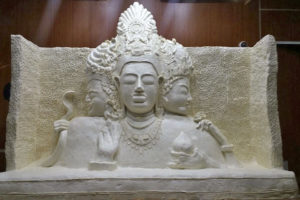 The magnificent margarine sculpture of TRIMURTI, which was on display for the past month at the Santacruz Airport’s Domestic Terminal had been a great centre of attraction and a ‘selfie’ taking hot spot for visitors from all walks of life. Little did the visitors realise that they were witnessing a piece of history, because this very sculpture has now made its way to the GUINNESS BOOK OF WORLD RECORDS as the biggest free standing sculpture made entirely of margarine (which is a base for any bakery product and just a bit harder than normal butter in frozen stage). It took Chef Devwrat 10 days to make this sculpture with an average of 14 hours of work each day. Margarine can melt easily at room temperature, so the entire sculpting was done in an air-conditioned glass walled room with a constant temperature of 18 to 20 degrees Celsius. During the process of sculpting, the sculpture developed cracks thrice and at one stage almost collapsed. But through sheer perseverance and patience, Chef Devwrat worked and re-worked on the dynamics and the sculpture was finally complete and went on display on 24th February 2017 on the auspicious day of Mahashivratri. This Trimurti was built using a total of 1506.800 Kg of margarine and stood 6.5 ft tall and 8.5 ft wide. Most importantly it did not have any supporting beams, wires or rods, one of the main criteria for the record. 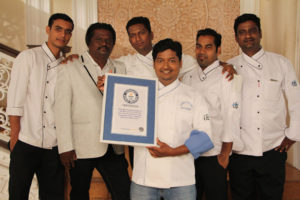 TV Celebrity Chef Devwrat has painstakingly developed the art of carving food for the last 21 years. He has practised his own signature style of carvings on fruits, vegetables, and chocolates for years now. He earned his first international accolade on a global level when he was the Silver medallist for the International Culinary Olympics held in Germany in 2012(a first silver medal for India) for his margarine sculpture ‘O Cinderella’, depicting the immortal fairy tale at the point of the midnight hour. The competition had more than 1800 chefs participating from all over the world. It was since then that Chef Devwrat nurtured a dream, a dream which can take his skill and also depict our rich Indian heritage to a more global level. So he decided to go for the bigger and the best-THE GUINNESS world record and the rest as they say is history now-both literally and figuratively!

“My strength and my source of inspiration was and has always been my father Anand Vinayak Jategaonkar. I am sure he is watching me proudly from up there. But at the same time this achievement would not have been possible without my team of chefs who assisted me throughout with all the arrangements and most importantly TFS (Travel Food Services) who are not only my current employers but also my main event sponsors. It was TFS who showed the faith and confidence in my vision. I don’t know what God almighty will inspire me to do next but for now this is it!” signs off Chef Devwrat with a sense of accomplishment and pride.

Life is a combination of music & Good food ! 😊

Today I am sharing with you my restaurant style V

The Song that defines life! Pls forgive me for my

Margarine sculpture ' Gratitude', made by me for